Ring ring! Hello? Listening skills? Are you still there?

It’s me again! I’ve come to check up on your English! 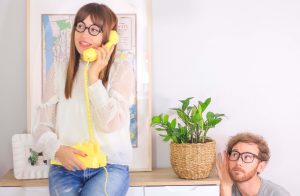 Fill in the gaps:
Hey! Happy Thanksgiving!
Thanks God well I’m so 1. ______ that you came you just you look great. You must have lost like 150 pounds yeah I’m gonna be one of the Subway sandwich commercials. Oh it’s no 2.  ______ it’s no sugar it’s no dairy it’s no good throw it out.
Do you wanna meet some people? This is my husband Chandler Chandler, this is Will. Oh hey I’d  your hand but I’m really into the game. 3. _______ I think it’d be better for my ego if we didn’t stand right next to each other. This is Phoebe. Hi! Hey! WOW! Well done.
Can I give you a hand? Sure. Monica I can’t get over how great you look, you look stunning.
Well you look incredible too you’re just… you’re so fit. I’m watching the game but I’m not 4. _______.
I meant to tell you Ross is coming. Ross is coming great I love Ross. Good and Rachel Green too.
Oh. Is there a problem? No it’s okay it’s just uh God I hated her. What? Yeah I hated her, she was horrible to me in high school. But hey it was a long time ago I’m in a good place might be 5. _______ fun to see her again. Got any cakes or cookies or something? No, Will no!
You know it’s been a while since we’ve screamed something maybe we should, ok.
Oh come on! Nooo damm you ref! You burn in hell!
Well  Ross, hey you came man you look incredible! HOT STUFF! Hot stuff?
It’s good to see you man yeah man so so what are you up to? I’m a commodities 6. ______ . Really
yeah that sounds interesting. Yeah it’s not yeah but I’m rich and thin.
Oh man I don’t think I’ve seen you since Lance Davis’s graduation party.
That was such a fun night. Yeah would’ve been good if we had gotten in but still real fun.
God were lame back then, you remember how 7. ______ dinosaurs we were? Yeah.
So what do you do now? So how long are you in town?
Hi, hey sweetie. Rachel Green. Oh oh that’s right are you gonna be okay? Oh I’ll be fine just God I hate her Ross I hate her. Will high school was was a long time ago. Look at her standing there with those 8. _______ my two greatest enemies Ross, Rachel Green and complex carbohydrates.
Oh my god Monica who is that? That’s Will from high school. Oh I do not remember him, wow really got that sexy smoldering thing going on. Oh god he’s look at the way he’s just 9. ________ at me I think he’s trying to mouth something to me but I can’t make it out.
Ok dinner’s ready! Solid effort, ok so who won? Troy well the Lions technically won but it was a moral victory for the Green Bay mermen. Hi Will right? right right. Hi I’m Rachel Green. Oh I remember you.
Really? aren’t you sweet? I gotta tell you though I’m I’m having the hardest time placing you. Oh hang on I think I remember you did we um did we 10. _______ around at Lance Davis’s graduation party?
You’re unbelievable!
Thank you!

Oh dear! That was hard! Did you get any of them? Let’s see!

I’m so glad to see you! Let’s catch up soon!

Do these homemade biscuits have any fat in them?

I need to go to the dentist plus I need to take the car to the garage.

You need to speak a bit louder darling, grandpa is a bit deaf.

It might actually be fun to see her again.

She works as a broker at the London Stock Exchange.

People who stare at your phone on the underground are so rude!

10. Fool: tonto. To fool around with someone: tontear con alguien.

Just to let you know, she’s my wife, so you’d better stop fooling around with her.

Ring ring! It’s me again! I’ve come to check up on your English!

Hello? Listening skills? Are you still there?

Are you afraid of missing out? | Inglés en 4 minutos

We’re continually being bombarded with suggestions about what we might do: go jet skiing, study in Colorado, visit the Maldives or 1. ___ ___ a tech company out west. The modern world makes sure we know at all times just how much is going on out there, it’s a 2. _____ in which intense and painful doses of FOMO or fear of missing out are going to be inevitable. There are two ways of looking at this: romantic or classical.

To the romantic temperament, missing out causes immense agony. Somewhere else, noble and interesting and attractive people are living exactly the life that should be yours, you’d be so happy if only you could be over there at that party with those people working in that agency of Washington Square or holidaying in that shack in Jutland. Sometimes it just makes you want to 3. ______ into tears.

The romantic believes in the idea of a defined Center where the most exciting things are happening. At one time it was New York, for a few years it was Berlin, then London, now it’s probably San Francisco and in five years it may be Auckland or perhaps Rio.

For the romantic, humanity is divided into a large group of the mediocre and a tribe of the elect artists 4. _______, the edgy part of the fashion world and the people doing creative things with tech. As a romantic it’s exhausting inside your soul your mother sometimes drives you 5. _____, her life is utterly dull, how can she accept it? Why isn’t she a Qing to move to the Bay Area?

She’s always suggesting you take a job in Birmingham or inviting you on a walking holiday in the Lake District. Sometimes you’re quite rude to her, you avoid certain people like the plague, that shy friend from school who 6. _______ with their weight, the flatmate who’s a telecoms engineer and wants to go into local politics, being around individuals who are so unglamorous and 7. ______ in ambition can feel pretty fatal for their part classically minded people.

Acknowledge that there are of course some genuinely marvellous things going on in the world, but they doubt that the obvious signs of glamour are a good guide to finding them. The best novel in the world they like to think is probably not 8. _____ winning prizes or storming up the bestseller lists it may be being written at this moment by a Hritik woman living in the otherwise unremarkable Latvian town of Lea pooja.

Classical people are intensely aware that good qualities coexist with some extremely ordinary ones, everything is rather jumbled up. Lamentable taste in jumpers is compatible with extraordinary insight, academic qualifications can give no indication of true intelligence, famous people can be 9. _____ obscure ones can be remarkable at a perfect launch party, drinking sandalwood cocktails at the coolest bar in the world you could be feeling sad and anxious.

You might have the deepest conversations of your life with your 10. ____, even though she likes watching snooker on television and has stopped 11. _____ her hair. The classical temperament also fears missing out but it has a rather different list of things that they’re afraid of not enjoying. Getting to truly know one’s parents learning to 12. _____ well with being alone, appreciating the consoling power of trees and clouds, discovering what their favourite pieces of music really mean to them, chatting to a seven-year-old child.

As these wise souls know, one can indeed miss out on such extremely important things if one’s always rushing out a little too intently to find excitement 13. ______. Heading off in haste to that stylish bar with a see-through elevator packed with some of the city’s top creatives.

To set up 👉 instalar, montar, establecer.

“They’re setting up a bakery opposite my house.”

“I love getting to know people from different cultures.”

To burst 👉 explotar, romperse. ‘To burst into tears’ quiere decir ‘echarse a llorar’.

“My father burst into tears when I told him I had been offered a job as a writer.”

“Are entrepreneurs born or made?”

También es un sinónimo de ‘loco/a’. “Are you seriously going to give up your job and move to Hawaii? You must be nuts!”.

“I really struggle to get up in the morning without pressing snooze at least five times.”

“I would hire him if he weren’t lacking one of the most important characteristics of a good customer service representative; empathy.”

“I’m currently looking for an assistant to help me out with admin tasks.”

“Life’s too short to be dull.”

“Mum, I was thinking about dyeing my hair pink, what do you think?”

“I’m starting to feel like I can’t cope with all the stress of running my own business. I think I need an assistant.”

“If they don’t have the book I need, I’ll have to look elsewhere.”

Wishing you a great week from Amigos Ingleses

Look at the glass half- empty and then feel grateful whenever things aren’t an 3. _______ catastrophe.

Stop 4. _______ about how awful other people are most annoying people aren’t 5. _______ they’re just anxious or sad forgive them they didn’t set out to hurt you, they’re just under a lot of pressure.

Think of death a lot keep a 6. _______ on your table you probably only got about four hundred thousand hours yeah.

Laugh at yourself stop thinking of yourself as a stupid idiot, do something 7.  ___    nicer, a lovable fool.

Make regular appointments to talk with someone you don’t spend enough time with.

You ask yourself what you really want and are anxious about stop trying to make yourself happy it’s impossible for concentrate on 8. _______ up other people.

Throw your phone off a cliff for a bit so you can finally notice 11. _______ especially your partner and your mum give up on the idea that you should be normal the only normal people are people you don’t know yet everyone is 12.  _______ and that’s totally okay.

“I’m hopeful I’ll be able to publish the book by April next year.”

“Their marriage was a total failure, they got divorced after 6 months.” “Goodness gracious me, that was quick!”

“She outright refused to cooperate with the police!”

To rant 👉 despotricar, echar pestes. “Stop ranting about how unfair you were treated and do something about it!”

“The teacher gave me an evil look when she saw me using my phone in class.”

“The skull found in the forest is said to be over a thousand years old.”

“My English is far better than it used to be.”

“I’m so sorry to hear about your cat passing away. Is there anything I can do to cheer you up?”

“What’s your height and weight and age?”

“Sorry to bother you but could you put some suncream on my back please.”

“There’s so much boring stuff I need to do this week. I’m not looking forwared to it. ”

“You put honey in your coffee? That’s weird!”

Are you ready? Pues … Let’s begin!

See you next week!