“The idiots of the New York Times,” according to F.J. Losantos

Every time the extreme right remembers me, I am afraid. Jiménez Losantos, the standard bearer, did just that yesterday in his column in El Mundo. Vanity keeps me from ignoring it without refreshing his memory.

—
(At the petition of some “idiot” friends and colleagues of the foreign
press – from both conservative and progressive media- I copy and paste
below an English version of yesterday’s post. Aquí está es la versión de «Los bobos del NYT» de ayer en castellano)

To attack Judge Garzon, who was supported last Sunday by one of the most prestigious newspapers of the world, Federico J. Losantos tries to discredit the New York Times as a gang of left wing idiots («bobos»). Come on! The New York Times? For Federico J. Losantos, the reporters and editorialists of the NYT are a handful of losers who know nothing about the press. The recklessness and shamelessness of FJL – products of his active ignorance- makes my hair stand on end.

I am copying and pasting the paragraph in question of his column “Liberal Comentaries” (liberal?) in the newspaper edited by Pedro Jota [Pedro J. Ramirez, Editor of El Mundo] last Monday:

“I’ve sometimes said that there is only one thing more idiotic than a progressive European and that is a progressive American. That grotesque editorial against Aznar titled A Chill in Spain (just for firing from RTVE a PSOE propagandist married to the editorial section of the NYT), the Progressive’s Bible, proved I have never been so right.”

The editorial of Sunday’s The New York Times on Garzón was reproduced entirely in this blog. You can review it here. The other editorial (“A chill in Spain”) cited by F.J.L. that the New York Times dedicated to my firing as correspondent of TVE [Spanish state controlled TV] in New York, following a televised pre-election interview that I did of Aznar in 1996, who was a candidate for the premiership of the Government was published in this blog on the 10th anniversary of Aznar’s victory (and of my firing). I copy and paste it below:

Editorial or The New York Times:

After 16 years (what memory!), Jiménez Losantos, the columnist of El Mundo now honors me by comparing me, if only in passing, to Judge Garzón, for the support that both of us have received from editorials in the New York Times. On the other hand, I must clarify that I have never belonged to the PSOE [Socialist Party], although now that this party is completely down and out, I may even feel like joining.

In spite of his good memory, Jiménez Losantos forgot to mention that dozens of editorials similar to that of the NYT, news stories, and articles about my firing from TVE were published in the leading newspapers of the democratic world (I still have almost a hundred now yellowed clippings) to the shame of the then new Spanish Prime Minister, José María Aznar, converted into a persecutor of freedom of the press.

I copy and paste a couple of them that I have on hand in this same blog (more “idiots” FJL would say of the  Financial Times or of The International Herald Tribune, to take one conservative and another progressive newspaper)

Editorial commentary of the  Financial Times: 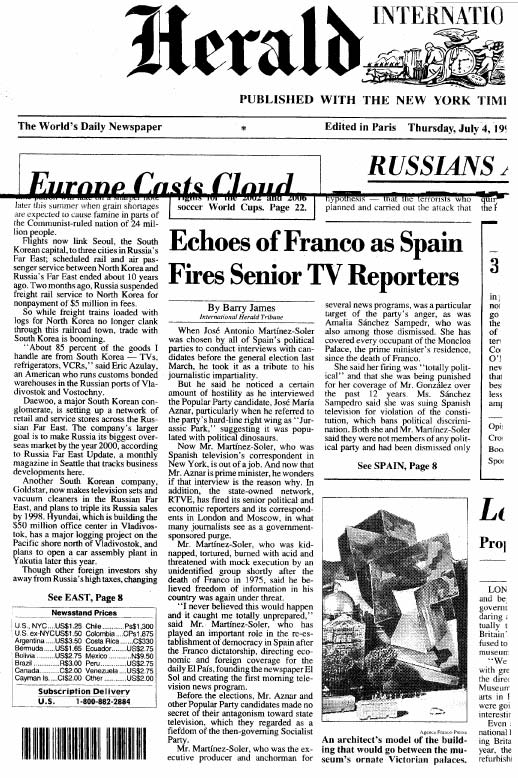 Fortunately, Bill Kovack, Curator of the Nieman Foundation for Journalism of Harvard University (where I was a student) surprised me by sending a letter to King Juan Carlos with a copy to Aznar (and to the editor of the NYT and other Nieman Fellows) and this provoked widespread global press coverage.

Letter from the Curator of the Nieman Foundation of Harvard University to the King of Spain: 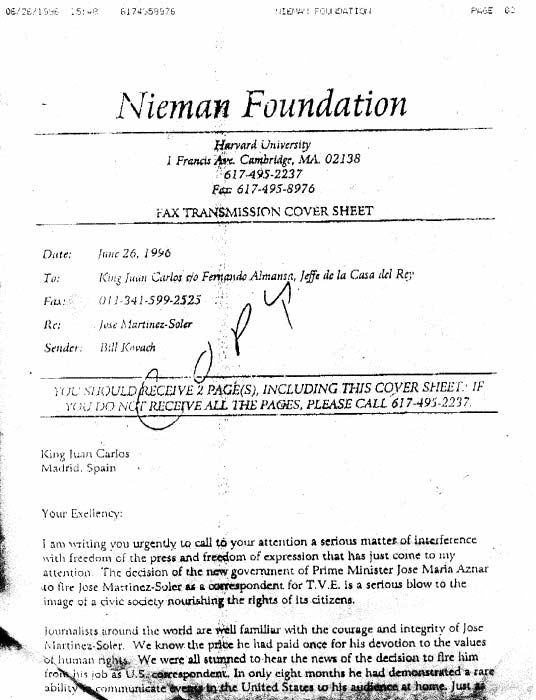 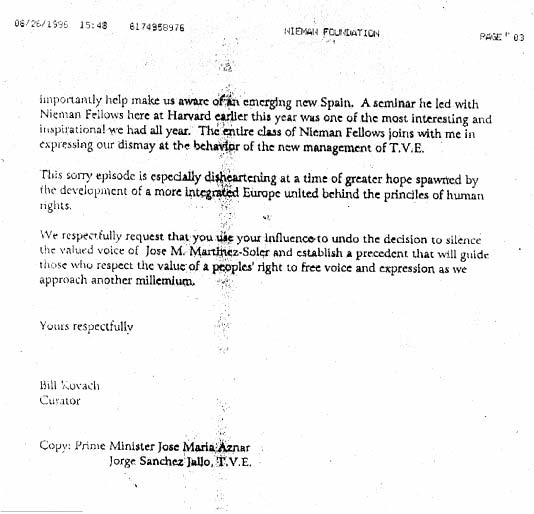 My children referred to the payment that a judge sentenced RTVE to pay me by declaring my firing wrongful as “the Aznar Fellowship.” Part of that compensation was used to give life to the daily 20 minutos, the most widely read general information newspaper in the history of Spain (and this magnificent web, www.20minutos.es , the third most widely read Spanish language [news ] website in the world.)

In any case, my firing is water over the dam and forms a part of the risks in the journalist trade. But I sincerely hope Federico J. Losantos forgets me. As I said at the beginning, when the extreme right talks about me, I get chills. Although, by calculating probabilities, I am no longer kidnap-able or torture-able but, trust me, I know what I am talking about when I say I am afraid.