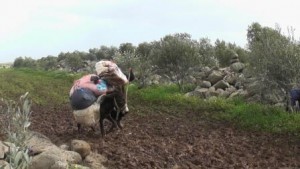 “Already reaching North Homs with supplies is very difficult, but the situation [here] is impossible. Geographically it is a valley, but we are surrounded by mountains and checkpoints – in reality it is more like an island with 90,000 people under an even more intense siege within the general siege on Northern Homs.

“It’s been three years since this area has been reachable by cars on regular roads. Whether it is for food, medicine or fuel, we can only go through a muddy and difficult path accessible only by foot, donkey or with small boats across Lake Houleh. We only have one path for supplies, but we call it the death path because there are snipers; whatever reaches us is covered in the blood of the people who have risked their lives to get it here.” Dr A.

This photo is to accompany the testimony of Dr. A. which was entitled “Medical supplies – covered in the blood of those who risked their lives to get it here”. The testimony was part of the package of comms to illustrate the 4th anniversary of the war in Syria. See the testimony for full details.